Combination of several tours and individual services.
Tour escort may change during the course of the program.
*Itinerary subject to change without prior notice.

DAY 1 • Madrid
Arrival at Madrid airport and transfer to the hotel. The rest of the day is at leisure. Accommodation in Madrid.

DAY 2 • Madrid
Breakfast at the hotel. Morning panoramic tour of Madrid to discover the medieval origins of the city, such as the Arabic fortress at the Barrio de la Morería. Drive through the courtesan district of the Hapsburgs and Baroque style buildings, Puerta del Sol, Plaza Mayor, Plaza de la Villa, Puerta de Alcalá, the Royal Palace, Cibeles and Neptuno Fountains, the famous Las Ventas Bullring, the Santiago Bernabéu Football Stadium, Castellana and the Salamanca district. Afternoon is at leisure. Accommodation in Madrid.

**In the event that the panoramic tour of Madrid is not operated for technical reasons, it will be replaced by the Hop-on Hop-off Bus for 1 day.

DAY 3 • Madrid • Cordoba • Seville • 542 km
After breakfast, depart by bus to Cordoba, passing through the land of Don Quichotte, a medieval character of local literature created by the Spanish writer Cervantes in the 17th century. Continue on a city tour of Cordoba, including a visit to the Mosque (interior) and the Jewish Quarter. In the late afternoon, continue to Seville. Supper and accommodation in Seville.

DAY 4 • Seville
After breakfast, depart for a panoramic city tour of Seville and its monuments such as the Cathedral (exterior), Santa Cruz Quarter, Maria Luisa Gardens and Plaza España. The afternoon is at leisure for you to discover more of the city on your own. Optional Flamenco show in the evening ($). Supper and accommodation in Seville.

DAY 5 • Seville • Granada • 248 km
After breakfast, depart through the heart of Andalusia, via the Caliphate road to Granada. Visit the Alhambra Complex, a set of fortified Moorish buildings on a hill overlooking Granada, and the Generalife Gardens. Optional Flamenco show ($) in a Gypsy Zambra at the Sacromonte square. Supper and accommodation in Granada.

**At the time of booking, you will need to provide a copy of your passport (required to visit the Alhambra).

DAY 6 • Granada • Valencia • 451 km
After breakfast, depart to the Mediterranean coast via Murcia and Alicante, the second largest city in the region of Valencia. Continue to the city of Valencia, the capital of the province, known for its modern Arts and Sciences Architectural Complex and the birthplace of the paella dish, renowned worldwide. Accommodation in Valencia.

DAY 7 • Valencia • Barcelona • 350 km
After breakfast, a city tour discovering the most prominent buildings and monuments of the old city. You will then be driven past the old riverbed of the Turia to the modern Arts and Sciences Complex to admire the symbolic exterior of the six buildings. Early afternoon departure northward, along the Mediterranean coast, to Barcelona via Tarragona. Accommodation in Barcelona.

DAY 8 • Barcelona
After breakfast, morning tour of Barcelona, a panoramic drive along the main avenues with its impressive modernist buildings by Gaudi such as La Pedrera, Casa Milá and many more. You will then see the Montjuic Park with spectacular views of the city and the harbour. Next, you will visit the Olympic Ring, the monument in honor of Christopher Columbus and the Olympic port. Afternoon is at leisure. Accommodation in Barcelona. 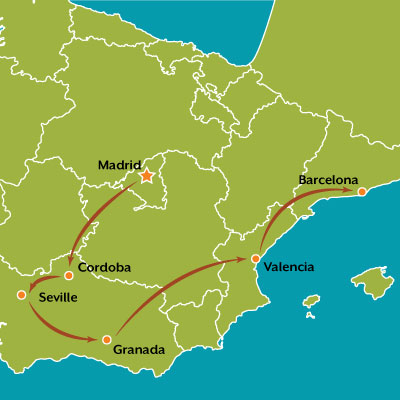