CRUISE AND ESCORTED TOUR IN ENGLISH AND FRENCH
12 DAYS • 11 NIGHTS
*Itinerary subject to change without prior notice.

Supplement per person for a main deck cabin $300
The captain reserves the right to modify the order of the itinerary.

Air transportation (available upon request) • Baggage handling • Beverages • Meals not mentioned • Entrance fee to Mljet National Park of 25 euros per person (to be paid at entrance) • Port fees • Hotel city tax • Personal expenses • Gratuities • All that is not indicated in “Package includes”.

DAY 2 • Zagreb • Plitvice • 130 km
Breakfast at the hotel. Enjoy a morning guided city tour of Zagreb including: the fortified Upper Town, the historical center, St. Mark’s Church with its multicolored roof, the Cathedral, the Croatian National Theatre and the University. In the afternoon, continue towards Plitvice for a tour of Plitvice Lakes National Park, classified by UNESCO as a World Natural Heritage site. The park hosts sixteen lakes that are joined in a series of cascading waterfalls surrounded by a dense forest. Supper and accommodation in the Plitvice region.

DAY 3 • Plitvice • Trogir • Split • 242 km
Breakfast at the hotel and early departure for Trogir to visit the St. Lawrence Cathedral. In the afternoon, visit the city of Split and Diocletian’s Palace, classified by UNESCO as a World Cultural Heritage site, including the Peristyle, Jupiter’s Temple and the Cathedral. Supper and accommodation in Split.

DAY 4 • Split • Dubrovnik • 229 km
Breakfast at the hotel. Depart for Dubrovnik with a panoramic tour where you will see the Fransiscan Monastery, the Cathedral and Rector Palace. Supper and accommodation in Dubrovnik.

DAY 5 • Dubrovnik
Breakfast at the hotel and cruise embarkation. Welcome supper and evening is free to enjoy a pleasant walk through the streets of Dubrovnik. Accommodation on board at the port of Dubrovnik.

DAY 6 • Dubrovnik • Korcula
Breakfast on board and depart for the island of Korcula, a medieval town and the birthplace of Marco Polo. Stop along the way to swim and lunch on board. Arrival in Korcula and evening is free. Accommodation on board at the port of Korcula.

DAY 7 • Korcula • Pucisca
Breakfast on board and depart for Pucisca situated on the island of Brac, known for its culture of stone masonry. You may visit the stonemason school (optional $) and its exhibits. Lunch is on board before arrival in Pucisca, followed by a swim, weather permitting, in one of the most beautiful bays on the island. Captain’s supper and accommodation on board in Pucisca.

DAY 8 • Pucisca • Split
Depart for Split after breakfast, with a stop along the way to swim and relax if weather permits. Lunch on board. Upon arrival in Split, enjoy a guided tour of the city, visit the seafront promenade and the Roman Emperor’s Diocletian’s Palace. Evening at leisure and accommodation on board in the port of Split.

DAY 9 • Split • Hvar
Breakfast on board and depart for Hvar. Swimming stop and lunch on board. Upon arrival in Hvar, you will enjoy a a sightseeing tour that includes the first public theatre in Europe, the Franciscan Monastery, and many more historic sights. Evening is at leisure and accommodation on board in the port of Hvar.

DAY 10 •  Hvar •  Stari Grad •  Mljet
Breakfast on board and depart for Stari Grad. The Stari Grad Plain and the old town centre of Stari Grad have been listed as UNESCO World Heritage. Lunch on board and sail towards Mljet, Croatia’s ‘’Greenest Island’’ will hypnotize you with its beautiful, untouched nature. You will be able to visit Mljet National Park ($). Accommodation on board in the port of Mljet.

DAY 11 • Mljet • Dubrovnik
Breakfast on board and depart for Dubrovnik. Stop along the way for a swim and lunch on board. Upon arrival in Dubrovnik, enjoy a guided, panoramic bus tour above the Old Town. Then, a guided visit of the historical center of Dubrovnik and a walk through STRADUN – the most famous street and square inside the town walls. Afternoon is at leisure and accommodation on board in the port of Dubrovnik.

DAY 12 • Dubrovnik
Breakfast on board and disembarkation. Transfer to Dubrovnik airport.

**The transfers are included only if passengers arrive on day 1 and depart on day 11 of the tour.
**During high season, a transfer by bus from Stari Grad/Jelsa could be substituted to reach Hvar. 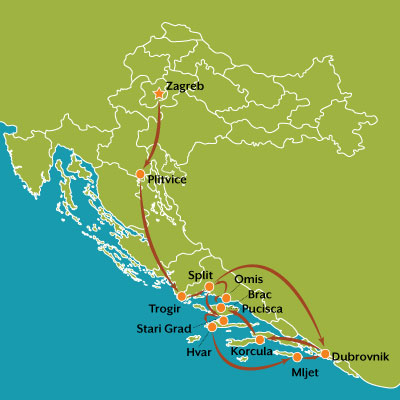