Treasures of Croatia, Bosnia-Herzegovina and Serbia

Treasures of Croatia, Bosnia-Herzegovina and Serbia

ESCORTED TOUR IN ENGLISH AND FRENCH
9 DAYS • 8 NIGHTS
*Itinerary subject to change without prior notice.

Air transportation (available upon request) • Baggage handling • Beverages • Meals not mentioned • Personal expenses • Gratuities • All that is not indicated in “Package includes”.

DAY 2 • Zagreb • Plitvice 150 km
Breakfast at the hotel. Enjoy a morning guided city tour of Zagreb including: the fortified Upper Town, the historical center, St. Mark’s Church with its multicolored roof, the Cathedral, the Croatian National Theatre and the University. In the afternoon, continue towards Plitvice for a tour of the Plitvice Lakes National Park, classified by UNESCO as a World Natural Heritage site.The park hosts sixteen lakes that are joined in a series of cascading waterfalls surrounded by a dense forest. Supper and accommodation in the Plitvice region.

DAY 3 • Plitvice • Trogir • Split 257 km
Breakfast at the hotel and early departure for Trogir to visit the St. Lawrence Cathedral. In the afternoon, visit the city of Split and the Diocletian’s Palace, classified by UNESCO as a World Cultural Heritage site, including the Peristyle, Jupiter’s Temple and the Cathedral. Supper and accommodation in Split.

DAY 4 • Split • Dubrovnik 229 km
Breakfast at the hotel and depart for Dubrovnik, also classified as a UNESCO World Cultural Heritage site. Your sightseeing tour of Dubrovnik will include the Franciscan Monastery, the Rector’s Palace and the Cathedral. Supper and accommodation in Dubrovnik.

DAY 5 • Dubrovnik
Breakfast at the hotel and the day is at leisure. Supper and accommodation in Dubrovnik.

DAY 6 • Dubrovnik • Mostar • Sarajevo 265 km
Breakfast at the hotel and depart for Mostar. Enjoy a guided city tour where you will see the Old Bazaar with the bridge, the Mosque and a typical Turkish house. Continue on to Sarajevo. In the afternoon, a guided visit of Sarajevo including the neighborhood of Bascarsija and the Gazi Husref Bey Mosque. Supper in a local restaurant. Accommodation in Sarajevo.

DAY 7 • Sarajevo • Belgrade 295 km
After breakfast, depart for Belgrade with a stop for lunch ($). Continue on to Belgrade. Supper in a local restaurant. Accommodation in Belgrade.

DAY 8 • Belgrade • Zagreb 393 km
After breakfast, a city tour of the charming town of Belgrade with a visit of the imposing Kalemegdan Fortress. You will also see the Republic Square, Knez Mihajlova Street and Saint Sava Temple, one of the largest Orthodox churches in the world and Tito’s Memorial. Continue on to Zagreb for supper and accommodation.

DAY 9 • Zagreb
Breakfast at the hotel, transfer to Zagreb airport.

**The transfers are included only if passengers arrive on day 1 and depart on day 9 of the tour. 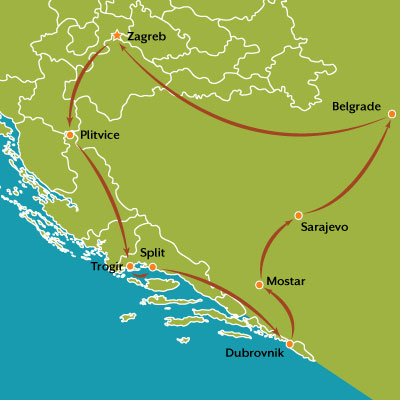